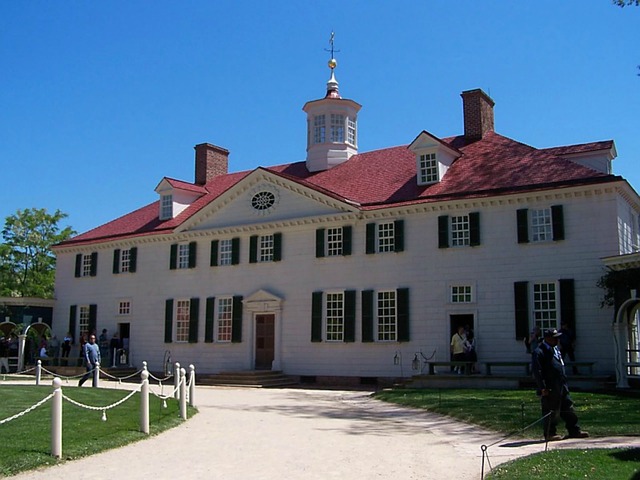 The History of Mount Vernon

Mount Vernon was in the Washington family long before George Washington became the owner of the plantation. It was originally named Little Hunting Creek Plantation and was owned by John Washington. John’s son Lawrence was next in line, and he passed it to his daughter Mildred who later sold it to her brother Augustine. Mount Vernon was George’s childhood home.

Augustine was George Washington’s father, but the land was first given to the older half-brother, who was the one who changed the name to Mount Vernon and then passed on through his two heirs (and their wives) before being inherited by George. George moved into the home in 1759 and leased it until 1761 when it finally became his.

Mount Vernon overlooks the Potomac River and is a short eight miles from Alexandria. The property has many buildings, not just the home. Sitting on 8000 acres of land, there is a sixteen-sided barn that attracts attention, four gardens that Washington himself created, two tombs, a blacksmith shop, servant’s quarters, and multiple slave quarters. Those are just a few of the buildings and sights the property boasts.

While there are conflicting reports on how Washington treated his slaves, history tells us that he began to question the practice of owning slaves after the Revolutionary war. He didn’t speak out publicly about slavery in order to avoid debates over the topic, but having left the release of his slaves in his will speaks to his changed mind about it.

Honestly, nothing about slavery is less than cruel, but it’s been reported that Washington wasn’t averse to whipping his slaves when he felt it was deserved. What made it deserved could be anything from breaking too many tools to stealing food. Some slaves were sold if they tried to escape.

Washington’s wife, Martha, died after he did, and in his will, he wrote that their slaves were to be freed when she died. Fearing for her life, she released them the year before she died. Rumors had it that Washington was brutal to his slaves and worked them very hard, so after he passed in 1799, his wife started to think they may kill her to hasten their freedom. She released them in 1801.

Unfortunately, not all of the slaves released by Martha after Washington’s death became free men and women. Some of the slaves held at Mount Vernon were owned by the Custis Estate, left to her when her first husband died. The ownership of the Custis Estate slaves stayed with the estate, then transferred to Martha’s children when she died.

George Washington appears to have loved his home so much that he is still there. There have been multiple sightings of the former landowner. The Ghostly Podcast covered many of Washington’s ghost sighting at Mount Vernon in one of their episodes.

One of the most recent recorded Washington sightings at Mount Vernon comes from 2006. A woman encountered the ghost while in the Yellow Room when she was locking things up at the end of the day. She let someone out of the building near the study, then made her way up the back stairs..

She walked past Washington’s bedroom and made her way into the Yellow Room. It was then that she felt a sudden pressure on her shoulders, but no one there was when she turned. This happened to her more than once. Only when she had someone stay with her while she locked up did she avoid the ghostly touch.

Washington died in the comfort of his own four-poster bed, which still sits in the same room. Sick and ailing, unable to shake his fever, Washington slowly passed in that bed, and his ghost often revisits this space.

Why anyone would willingly sleep in that bedroom, in the bed where Washington died, is beyond comprehension, but people do. Many of those who have braved a night in there have felt the presence of the president. When his presence is felt late at night by overnight visitors, most people find it hard to sleep.

One story about a ghost in this room has a couple of friends staying there at their own request. For one reason or another, they lit a candle before going to bed, placing it in the center of a basin of water (likely to prevent a fire).

The flickering of the candle woke them up. Then, the couple heard a noise, and the candle suddenly went out. Unsure of which side of the bed Washington died on, for whatever that mattered, the two decided sleeping was not in the cards for them, so they got up and got dressed and sat in fear until the rise of the sun. Each slight settling noise of the house startled them, and both thought they’d heard the noise of Washington’s sword clanking in the corner of the room.

George Washington’s Ghost at the Stables

One of the guards working at Mount Vernon had multiple experiences through the 80s and 90s that revolved around the stables. Because Mount Vernon is a tourist destination, there are alarms on many of the buildings, and the stable is no exception.

This particular guard experienced the stable alarm going off many times. But that wasn’t the only alarm going off. You see, it was Washington returning home and putting his horse in the stable. The guard reported that when the alarms went off in the stable, not long after, they would go off at Washington’s bedchamber.

It was just enough time in between the two alarms for Washington to have taken the saddle off his horse, put it in a stall, and strolled to the home to his room. When guards would check the alarms, no one was there.

Other Ghosts at Mount Vernon

George Washington’s ghost isn’t the only spirit haunting the grounds of Mount Vernon. Many slaves lived and died on the plantation. The folks at Mount Vernon these days don’t do anything to hide the ghost stories. In fact, you can read detailed accounts of all of the ghosts people have spotted right on the website for the plantation.

It’s believed that one ghost spotted near the memorial for those enslaved at Mount Vernon that stands by the forest is that of William Lee. He was Washington’s personal servant. Other ghosts have been seen in the vicinity of the memorial, and people have heard disembodied singing there too.

There was one story told of how Colonel Harrison Howell Dodge, the third resident superintended of Washington’s estate who died in 1937, was seen as he shouted something about what was going on. Another time, some security officers driving on the property saw a young girl on the path ahead of them, then suddenly she was right next to their vehicle. A woman in 18th-century clothing was seen on the stairs in the 1980s.

Ghostly body parts have been spotted, like when a person felt someone brush past them, but all they saw were feet and the bottoms of women’s skirts. People have witnessed unidentified ghostly figures floating through the mansion.

Aside from ghost sightings, other strange phenomena have been spotted and felt. Alarms have gone off at strange times of the night when there was no reason for them to go off, the temperature will randomly drop and then go back to normal, and people have even heard the sounds of keys, as though someone was carrying them around.

The Ghost of Ann Pamela Cunningham

Ann Pamela Cunningham was the founder of the Mount Vernon Ladies’ Association. This group is accredited with rescuing Mount Vernon. The organization spearheaded women’s empowerment. Cunningham purchased the mansion and 200 acres of Mount Vernon land in 1858 from the final Washington to live there, John Augustine Washington III.

Mount Vernon meant a lot to Cunningham, and it appears she has stuck around after death as well. Cunningham died in 1875, but she’s been spotted in more recent years spending time in one of the rooms after hours. She appears totally gray, dressed in Civil War period clothing.

Mount Vernon is rife with ghostly presences. Even if you don’t experience a visit from Washington himself, there’s a good chance you’ll see some other ghost or at least some random ghostly body parts.