The Ghost at Swope’s Townhouse 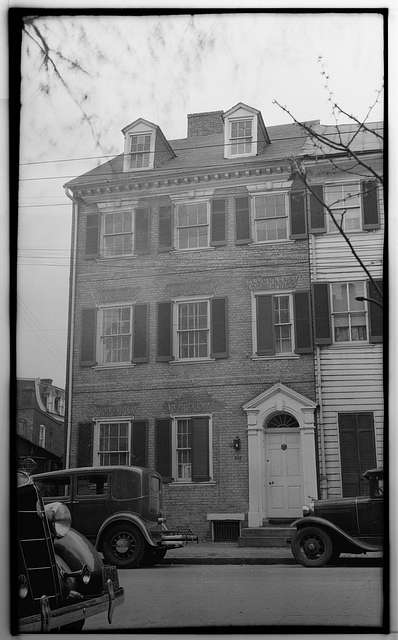 While it’s not the oldest home in Alexandria, it is one of the ten oldest houses currently standing in this colonial town. Aside from its age, this home has some paranormal significance—the ghost at Swope’s townhouse has a bit of an angry side when it wants to.

While you can have a psychic come into a home and try to get to the bottom of things when it comes to whose presence is haunting a space, sometimes it’s difficult to pinpoint precisely whose spirit it is who’s hanging around. In the case of the ghost at Swope’s townhouse, there could actually be two men spending their afterlives there.

Who is Colonel Michael Swope?

Swope, a Revolutionary War Battalion Commander, became a prisoner of war on November 16, 1776, when he was captured by British forces at the battle of Fort Washington. He was among 3000 other prisoners that were taken that day. He remained a captive until January 1781. According to some documents, Swope’s release came when he was traded for Benjamin Franklin’s loyalist son, William Franklin. But he was only let go after the war had ended.

The ordeal left him with a bad taste in his mouth when it came to the British. A fact that would come up again after he was dead (some people hold their grudges long into the afterlife). Swope and his family packed up moved to Alexandria in 1784, taking up residence at 210 Prince St.

His time at war wasn’t easy, so having the chance to settle down with his family probably gave him some peace. There’s not much information about Swope after he was released, just that he possibly worked as a Chandler or owned a business in Alexandria. It could be that it’s difficult to find info because his full name was George Michael Swope—and between the two names (with George or without), there is some conflicting information, such as death date, though both seem to be born in the same year.

Whether or not they are one and the same, both reportedly moved to Alexandria after the war. That’s enough to convince some that they are the same man—records weren’t as easily kept or accessible back then as they are today.

The History of 210 Prince Street

Swope himself built the townhouse standing at 210 Prince St. He and his wife Eva moved into the home once it was finished, along with their five children. While Swope died in 1809 (or in 1792, as alternating reports would have it), his family owned the home until 1823, then it passed through a few hands, as homes do.

The home stands three and a half stories high. It is a colonial townhouse, and it shares a wall with the townhouse to the right. The Zillow listing for this house says it has four bedrooms and four and a half bathrooms, making it a decent-sized family home at 4077 square feet. These days, though it’s currently off the market, the home has a worth of around two and a half million dollars.

The man put everything he ever dreamed of in this home of his. It had beautiful woodwork throughout the living room. Crown molding was used around the entire house. He had a music room and a library, as any lover of books would require in their dream home.

Sometime after the Swope family no longer owned the residence, it was divided into apartments but was later changed back to a single-family home. The house has gone through many renovations over the years.

While renovations often awaken ghosts in old homes, that wasn’t the case with the Prince Street house. It was something else that awoke a long sleeping ghost and caused it to return to this old place of residence.

The Ghost at Swope’s Townhouse

It is possibly that it is Swope himself that now haunts the dream home he built in Alexandria. Some think perhaps it’s the ghost of a spy named James Dixon who was killed by the British. Why Dixon would haunt Swope’s home is explained away that he may have seen Swope as a hero.

Whichever man haunts the abode, it appears the ghost isn’t a fan of anything British. That makes sense for both of these entities having had run-ins with the British during their lives.

Michael Lee Pope wrote extensively about the ghostly happenings at the Swope house in “The Ghosts of Alexandria.” The hauntings don’t begin at Swope’s death, when he was reportedly taken by carriage and then boat to be laid to rest in his family’s vault in Pennsylvania. In 1859, the yellow fever epidemic that swept the state caused the health officer to have the Swope family vault dug up.

It was the disturbance of Swope’s place of rest that seemed to spark the hauntings at his old home in Virginia. It was around that same year that the first reports of paranormal activity were reported in the home on Prince Street. Perhaps ghostly things happened before them and no one talked about it, or maybe it was the disturbance of the dead Swope that brought him back.

Swope’s home was a gorgeous rendition of his dream residence, complete with a music room on the third floor. That music room seems to be one of his favorites even after life. A few of the ghostly reports revolve around that particular area.

One woman living in the home saw a man in military attire walk through a wall opposite the music room. She ran into the room to find no one there. He’s also been seen on the first floor and sometimes standing on his suitcase.

Visitors to the home and those living there have reported strange feelings in different areas. On the stairwell, there is supposedly a cold spot that is so chilling people have felt it was hostile. How cold does a spot have to be for you to think it means you harm? It was a spot that proved hard to move through—this same feeling would happen again later inside the home.

The cold spot reportedly faded over the years, perhaps because Swope’s became settled in his haunting of the home or liked the people who were living there. He didn’t always stay calm, however. A little girl living in the house with her family described the soldier ghost exactly as Swope looked, without having ever seen a photo, after overhearing a ghost tour guide talking about him outside the house.

In the 1930s, a British woman toured the home in consideration of purchasing the place. As they explored the home, she had no issues. It wasn’t until they headed up to the third floor, Swope’s favorite part of the home, that things got weird.

Both the homeowner at the time and the realtor easily headed up the stairs, but the British woman was stopped short by an abrupt cold spot. The chilling presence wouldn’t let her pass. The woman claimed to the two up ahead of her that she had some psychic abilities and distinctly felt that Swope was there holding her back, not wanting her in his home because of his British blood. While the ghosts didn’t harm the woman, he was sure to get his paranormal point across.

There are stories about people tripping as they walk by tour groups in front of the house whenever someone tells the story about the British woman. Perhaps the tripping folks have a little British blood in them, or maybe it’s just a coincidence. Tour guides often warn people about the ghost’s dislike of the British, just to save anyone from having a bad experience if they ever get a chance to enter the home.

Whether the only ghost in the home is Swope himself, or there is more than one ghost, this house definitely has a paranormal presence. Swope probably won’t stop haunting the house as long as it stands; he’s already been hanging around so long.