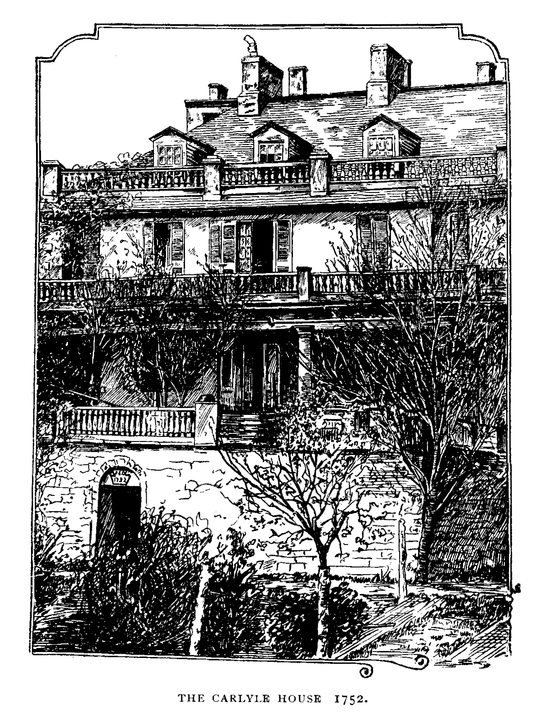 The Carlyle House has been known by many names and remains a well-known destination in Alexandria, especially if you’re looking for ghosts. It’s not necessarily the Carlyle House alone that’s packed with ghosts, rather the empty lot of the building that once stood next door. Some of the ghosts of Carlyle House come from Green’s Mansion House, a ghost itself.

There’s definitely more to the Carlyle House than meets the eye. The property has a rich history, which includes a lot of death. Where death and tragedy strike, paranormal energy tends to lurk – from ghostly figures to orbs, something is haunting the Carlyle House.

The History of Carlyle House

Located between the waters of the Potomac River and the bustling Market Square, John Carlyle purchased the two lots that would become the building place of his home in 1749. He wanted easy access to trade routes for his business and the customers he’d be selling to, so this location stuck him right in the middle of both.

Carlyle started building his mansion in 1752, and it was completed in 1753 – when his wife, Sarah Fairfax Carlyle, would join him in their home. A memorable homecoming, their first son was born that same night.

Carlyle was one of the founders of Alexandria, but that didn’t protect his precious home from a military takeover, of sorts, shortly after he got it ready for living. Just a couple of years after finishing his home, in 1755, General Edward Braddock chose Carlyle’s home for his own living space for three weeks. Braddock was Commander-in-Chief of His Majesty’s Forces in North America. He came to the colonies to oversee the French and Indian War.

Carlyle did have slaves on his property and used them in all of his business holdings. Many records discuss the deaths of some slaves, from illnesses and even a drowning.

After the Carlyle family was gone, the home was again purchased in 1847 by James Green, a furniture manufacturer. Green wanted to buy the original one acre of Carlyle’s land but only managed to acquire three-quarters of it – the property had been sold off piece by piece while there were still living heirs.

The Carlyle House, at that time, was known as Mansion House. There was another building on the property that had once been a bank, which Green turned into the Mansion House Hotel and would later be known as the Green Hotel to locals. In the mid-1850s, Green expanded the hotel so that it completely blocked off the visibility of the original house.

In 1861, Union troops took over the Green Hotel and even evicted Green and his family from both homes. The hotel building was turned into a military hospital, and the mansion was a place for doctors and officers to live.

The Ghosts of the Hotel

There are many spooky and strange stories out there about the ghosts of both of these buildings, some stating that only the now torn down hotel was haunted and that the ghosts can only be seen in the yard of the Carlyle House. Then, there are others who tell of experiences at both places and that even the house has spirits. Carlyle House saw many deaths, young and old, in the Carlyle family, while the hotel saw death during its years as a hospital.

According to Michael Lee Pope’s book, “Ghosts of Alexandria,” all of the ghosts can be seen in the yard (even Sybil), and none of them are inside the original home. This book tells the tales of three people who reportedly fell from the hotel’s windows. Pope’s book may get some of the stories right, or perhaps it’s a skewed tale – as ghost stories get passed down, it’s much like the game “telephone” where sometimes things change a great deal by the time they pass through a few ears.

It’s believed that one Union soldier who was in the hospital at the hotel went insane or was possibly hallucinating from pain or medication and tried to escape out of one of the windows. He got caught up on an eave, hung for a while, then fell to the hotel’s balustrade where he was injured bad enough never to recover. He died a few hours after his ordeal.

A visitor to the Mansion House in 1905 fell from an upper platform fifteen feet from the ground. The man was spotted lying in the courtyard by some folks at the Braddock House, but they thought it was someone passed out in the yard – instead, the guy was dead.

When he was autopsied, it was decided he’d been dead for at least twelve hours. It was deduced the man must have been trying to cross an upper platform that connected the house and hotel. Since he was out there at night, it may have been easier to lose his footing and take a fall.

Patrick Buckley was a tour guide to those newly arriving in Alexandria, and that’s what the 1910 census listed him as. Buckley would give no more tours of the homes and sights of the town after 1912 when he drunkenly stepped out of a window in the hotel onto the fire escape and then fell to his death.

Early reports said that Buckley had been murdered, pushed from the window. However, the coroner ruled his death accidental.

While Pope’s book claims that the main house was free of ghosts, there have been reports of orbs and more in the still-standing former home of John Carlyle. In fact, some people claim to see an actual ghost hanging out inside the home.

Carlyle’s second wife, Sybil, has been spotted in the house more than once. Drafty rooms and cold spots are also said to be signs that Sybil is around. Perhaps because she was the “second” wife, Sybil gets blamed for the paranormal events that some people have experienced in the home.

Rumor has it that Sybil was very jealous of Carlyle’s love for his first wife and that she burned all of Sarah’s possessions that had been left behind after her death. There is some local folklore that rings similar to “Bloody Mary” tales, where girls named Sarah are dared to ring the doorbell of the home and yell, “Sarah, come outside,” to which the ghost of Sybil is said to appear in the gardens behind the house screaming in anger.

While no ghost cats have been reported, there was a mummified cat found sealed in the foundation of the home while restorations were being done. Research shows that this was common in many areas in the world – the “good luck” cat was meant to bring luck to the home and ward off evil spirits. It doesn’t seem that this was very lucky for the cat, and perhaps one feline may want to get revenge and let the evil spirits in.

Most of the yard sightings are attributed to one of the three “falling men,” but wouldn’t it be just as likely that those ghosts could be of some of the slaves that worked for Carlyle? Or, perhaps those souls are still at rest – waiting to wake up when the right section of the land or home is renovated.

Whether you’re one to believe Pope, that there are no ghosts inside the Carlyle House, or you can’t believe that with nine children dying in the home, and even Sybil, there couldn’t possibly be no activity, you probably believe by now that something lurks on the home’s property. The next time you stroll by the Carlyle House at night, look at the windows and see if perhaps Sybil is staring out at you or even the lucky cat perched in a sill winking at you.